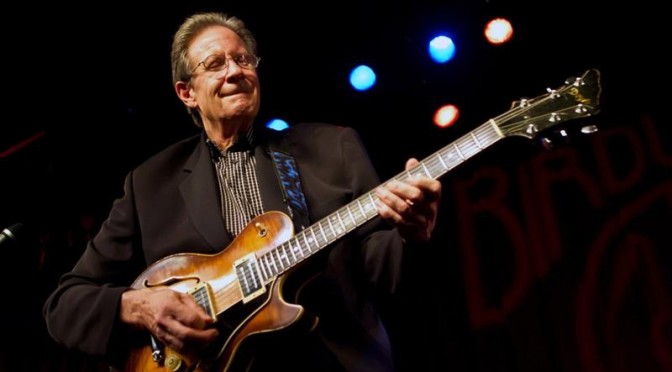 Today I would like to remember the American guitarist Vic Juris who passed away on December 31, 2019 because of complications from metastatic liver cancer. He was diagnosed with liver cancer around six months ago after noticing an exhaustion that plagued him during and after gigs.

Vic was perhaps best known for being a member of the David Liebman group. He worked as a studio musician, educator (he wrote some interesting books on polychords and intervallic structures) and he released several albums as a leader.

Vic was not so well known to the public like John Scofield or Pat Metheny but people who knew him had they highest respect about his musicality, his phrasing and his technique.

I was lucky to met Vic in 2018 where he was the guitar teacher at the Langnau Jazz Workshop which I attended. And yes, I took the chance to play one song with him once in a guitar class. I had some records from him and I was quite excited to met him in person and to be able to attend his class.

The lessons were very entertaining because Vic not only explained his approach to certain improvisation techniques, he also told us a lot of funny stories from his huge musical experience and he deeply impressed us with his playing. He was very generous to all of sharing as much as possible, and his wife Kate had to go every now and then to the copying machine for the additional material he wanted to distribute.

Drummer Adam Nussbaum and bassist Jay Anderson were in Langnau as workshop teachers and Vic Juris released his last two albums with this two great musicians. Vic’s playing his full of creative ideas but you can hear that he plays in “his” style, he has some signature licks and elements from where you can identify him.

The songs on the albums are a combination of own material and Jazz standards so you can also get an idea how he interprets jazz classics.