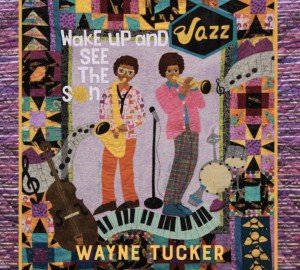 Around a month ago trumpet player Wayne Tucker released his album “Wake Up And See The Sun”.

Wayne Tucker is a 30 year old trumpet player/composer/arranger based in New York City. He is a 2009 graduate of the Jazz Studies program at SUNY Purchase under the direction of Todd Coolman. Wayne has played with many of today’s current Jazz stars including Kurt Elling, Dee Dee Bridgewater and Cyrille Aimee, and Pop stars like Taylor Swift, Elvis Costello, Matt Simons and Ne-Yo.

He just returned from a European tour with drummer Al Foster.

His new album is a mix of Jazz, Pop, Hip-Hop and some classical elements. All the material is very well arranged, excellently played and perfectly recorded and mixed. Each time you listen to the CD you will find new interesting elements, so this is an album that unfolds its class only after you have listened to it multiple times.

I asked Wayne about what inspires him when writing songs and his simple answer was “for each of the songs I was inspired by my life’s experiences”. Looks like he has a colorful life.

The first song on the CD is called “Bad Religion” and starts slowly with a poem from Dev Avidon, the sound engineer of the album, which he wrote “for the sense of imagery and imagination”.

The title song “Wake Up and See The Sun” comes with very nice horn arrangements and is in Wayne’s words  “about a girl that I used to date and takes us through the ups and downs of the relationship”.

Wayne has also the talent to write catchy pop songs and he proves it with the song “Little Buddy” where he sings together with Cyrille Aimée.  A very light and easy song which crawls into your ear and brain and you don’t want it to end. Lucky enough we get a reprise of this song in “Little Buddy Reprise”.  Wayne produced a video for this reprise and you find the link below.

Wayne became an actor in the short film “Hotel Bleu”. He also wrote the music for this film and you find the opening score called “Tears” on the album.

The song “Humans Groove Harder Than Robots” a Salsa-inspired funky groove tune is according to Wayne “about the wave of technology that we’re currently experiencing. In my perception the thing that separates humans from robots is emotion, which is what gives music character and emotion.” Absolutely right and the solos on this tune are the best evidence for this argument.

The album is available on CD Baby (my favorite online CD store). Please use the link below to listen to the tracks and to order the CD: 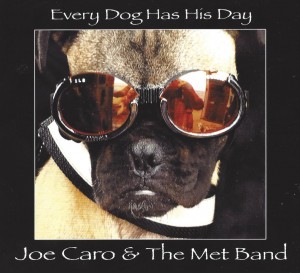 The really great thing about this CD is it’s mood, it has the perfect sound for those days where even a dog has his days, so if you have the blues but you need it funky and you want to shout it out loud then here is your album.

The CD starts with the Bob Dylan song “Highway 61 Revisited” with great funky horns and the whole band in full speed.

The next two songs are originals from Joe Caro, “Hot Mess” with the guitar giving a steady pulse and “Information Junkie” which reminds me of Steely Dan.

The Jimi Hendrix song “Fire” comes next, followed by “That Old Black Magic” which is maybe the song with the most positive mood on the album.

Since we all feel a little bit cheered up it’s time for the title song “Every dog has his day” where Joe Caro shows us the restricted and grey world of a dog “rolling over,  day after day, just for a treat,  I’d rather be astray”, but I guess what is valid for a dog is also valid for all of us as we have learned in the movie “Groundhog Day”:

Another highlight of the CD is “Natural Woman” played instrumental only where Joe Caro shows all his artistry and experience with different sounds and effects on the guitar.

If you like the blues, if you like it funky and on top of that if you like the sound of a guitar then this is the perfect album. As I said in the beginning, the album has also this unique mood, I would say this is urban blues at it’s best.