After the Christmas holidays and the new year’s symphony concert (where I had the pleasure to listen to a great concert of Beethoven’s 9th symphony) it was time to go back to the roots – back to the blues. This week offered the right choice to do that:

1. Bob Margolin in Marian’s Jazzroom: Bob Margolin, who played between 1973 and 1980 in Muddy Water’s band came with Tad Walters on guitar and harmonica and Chuck Cotton on drums.

Quite an unusual setup but Bob showed where the blues is coming from: A man with guitar sings the blues. Some friends join in – that’s it. The way Bob Margolin plays the guitar reminded me very strong of the sound of Muddy Waters and this is also something Bob admits himself:

“Having spent so much time on bandstands with Muddy playing next to me, listening super-critically to my every note, I still feel like he’s there, judging everything I play, and giving me special inspiration, and sometimes a smile, sometimes a dirty look.”

It was not any different this evening, the spirit that came from Bob Margolin was full of that feeling sucked in from his time with Muddy. And the stories he told, showed how the blues, how this inspiration is handed over from generation to generation. Bob Margolin does it the same way as he learned it before, he brought Tad Walters as the young guy to teach it.

Bob played some of his tunes, some classic blues pieces and a little bit of country-blues (we heard “The Weight”).  After starting rather slowly, the band picked up during the show and it became a nice evening with a lot of memories coming up.

Bob Margolin “didn’t want to scare us” with too loud or to fast songs, but the second group I saw this week didn’t really care about that.

2. Frank Salis H3O feat. Francis Coletta in the bejazz club: Frank Salis (org),  Marco Nevano (sax), Rocco Lombardi (dr) from Ticino together with Francis Coletta (g) from Fribourg didn’t waste any thoughts if it could be too loud or too fast, they played what they love – groovy and funky jazz music. Franko Nevano’s playing has a heavy blues touch and Francis Coletta adds the hard-bop component to this band. The H3O band is very well rehearsed, Francis Coletta was in the studio to record the “Stonebreaker” CD in 2011 and joins every now and then the band.

These guys knew each other very well but that did not save the audience from surprises: The young talented singer Céline Piguet joined the band to sing one song at the end of each set. And here I had my deja-vu. Again people with different experience and age come together and pass on this spirit for live, rhythmic and improvised music from generation to generation.

If you like a groovy-funky jazz-organ then don’t miss this band, Frank Salis knows how to play this instrument very well and he is backed-up with an excellent drummer and a bluesy saxophone. If you get the chance to see H3O with Francis Coletta, even better, because he added the special touch with his guitar solos to this evening.

Two very good concerts which had one thing in common and brought me back to the roots of jazz music. It was indeed an excellent start in the new year.

The iTunes widgets contain links to two albums with Bob Margolin. The young Bob in Muddy Waters’ famous CD “Hard Again” and the grown-up Bob on his solo CD “In North Carolina”:

Frank Salis’ CD is not available on iTunes (you can order it directly from him, look at www.franksalis.com),  but I have added a live video which is found on YouTube:

Robin Nolan is a very active member of the gypsy scene in Amsterdam. He started there busking on the famous Leidseplein and since 2000 he is also very busy promoting gypsy jazz music with his blog and his educational material (www.gypsyjazzblog.com).

His holiday gift to all the friends and lovers of gypsy jazz music is a free CD giveaway of his 2007 album “Temperature” which was recorded after “doing a lot of ‘busking’ on the streets of Amsterdam” on one afternoon to “capture the magic on tape”. 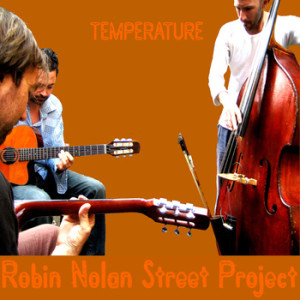 The following link brings you directly to the download page:
http://robinnolan.bandcamp.com/album/temperature

Or use the embedded band camp player to listen and download: