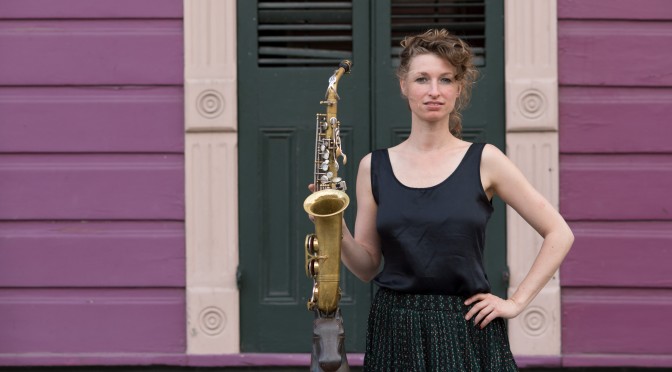 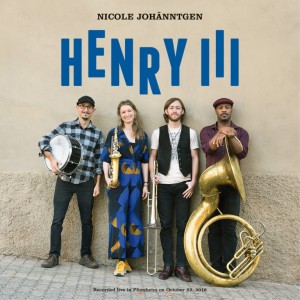 From Zurich, Switzerland comes a new album of saxophonist and composer Nicole Johänntgen. ‘Henry III’ is (obviously) the third album with her acoustic funk band from New Orleans featuring

The album was recorded live at the Domicile Jazzclub in Pforzheim, Germany, on October 22, 2018. An old-fashioned analogue two-track recording machine was used for this production and Nicole made sure that the album is also available on vinyl. Overall, an interesting setup for this record and so I was curious when I started listening.

The first song on the album is called ‘Life’ and starts easy with drums and sousaphone setting the groove with sax and trombone warming up a little bit before playing the melody.  Played with great precision and fantastic timing. The first solo part of this song is a dialog between sax and trombone with fantastic support from drums and sousaphone followed by a conversation between sousaphone and drums. Excellent start and frenetic applause from the audience confirms the impression of amazing interplay combined with a cool groove.

The album continues with ‘Too Lose’, a slower and almost greasy tune based on a 3-3-2 bossa nova groove. The melody captivates us with its nice two-voice arrangement. The solo part ends with an old-fashioned almost dixie style duet between saxophone and trombone.

‘Discoland’ is the next tune on the album and it is based on a disco groove. Parts of the melody remind me of one disco song from the  1980′s, very funny. After solos of trombone and saxophone (with trombone support) comes a great drums solo.

‘Sweet and Honest’ is a nice ballad. Drums and sousaphone play very soft and keep trombone and sax in the lead. A great sousaphone solo raises from nowhere, feels like a wake-up call from the grave.

The album continues with ‘Biological’, a song in gospel-style harmonies. The first solo goes to Steven Glenn on sousaphone followed by another dialog between sax and trombone.

‘Zydeco’ is a tune based on the dance and folk music style with the same name from southern rural Louisiana. Nice background of sousaphone plus trombone or sax while the other instruments play solo. The pushing drums is the main characteristic from the Zydeco music. The song ends with a brillant drums solo

‘Dig Deep’ is a slow jazz waltz featuring the incredible Steven Glenn on sousaphone  and ends nicely with  Nicole and Jon Ramm singing the melody in two voices.

‘Fahrtwind’ is the next song. It has a steady moving groove. Very impressive is the precise playing of the whole band. The solo is again the typical dialog between sax and trombone.

The album ends with a lullaby. ‘Guetnachtlied’ is just a sweet melody presented by Jon Ramm on trombone , the perfect last dance of a live show.

This whole album impresses with the great precision, dynamics and the superb timing of all musicians. You feel that these musicians spend quite some time together and play this music right from the heart.

Nicole Johänntgen is currently on tour in Germany, Austria and Switzerland to present the new album. I had the chance to see her in Bern, it was a night to remember, the music was played without amplification and Nicole Johänntgen invited a special guest (as she does in every concert during this tour). The surprise came with Victor Hege, a second excellent sousaphone player and so I had the pleasure to listen to two incredible sousaphones pushing each other to the limit.

And finally the complete album as playlist on Spotify: