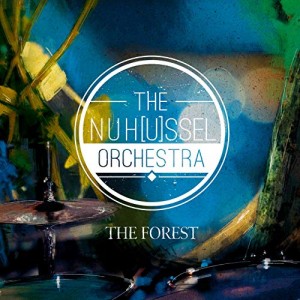 From Hamburg, Germany comes an interesting band, or better a collective of musicians called the NuHussel Orchestra. It was founded in 2015 by Wanja C. Hasselmann (drums/composition) and the band combines modern jazz with rock, funk, hip-hop, electro and classical music. The result is a powerful and energetic blend of modern urban jazz music.

The line up of the orchestra is

The orchestra released their debut album “First Things First” in 2017, they won the Future Sounds Jazz Prize in the same year and were invited to the Leverkusener Jazztage in 2018. The band has released their second album “The Forest” on August 30. For this recording a stage was built where they could record and film the sessions over a five day period. 38 musicians from 12 nations worked on this project and the effort pays off with a fantastic album and impressive videos of the recording session.

The album begins with an “Overture” like an opera with the NHO string quartet playing a soft and sad ballad indulging itself in long notes, moving seamlessly over into the second song “Orange Sand” where the orchestra goes all out and shows it’s incredible power. Salsa inspired with drums, percussions and horns that dominate the sound, excellently supported by bass, keyboards, guitar and the string quartet. This is already one of the highlights on the album.

“Phoenix” is a very well organized  and structured compositions with many different elements. It starts with a rock guitar riff supported by the horn section. Dynamics go down after this intro and the electric piano presents the harmonic structure, the melody is played by trumpets and saxophones. The solo goes to Jan Gospodinow on trumpet.

The next song “Overwhelmed” features Alana Alexander on vocals. She also wrote the lyrics to this song. The band is rounded off with backing vocals, harp and the string quartet. Alana gets a chance to improvise freely only backed up by an organ which creates an intimate gospel feeling. The song ends with a grand finale. An impressive performance by Alana Alexander and definitely another highlight on the album.

The title song “The Forest” comes next and we hear a banjo with a fusion band which creates a unique galloping groove. This song combines again a lot of different ideas into one great and complex composition.

“KAOS” features the German rapper Nico Suave. This song is a re-arrangement of Nico’s song from his 2015 album “Unvergesslich”. The arrangement features the horn section and the solo is a nice dialog between keyboard and guitar.

The album continues with “Jamboree” which has an electro background and horns and organ playing the melody. Interesting combination which works well. Max Rademacher plays a beautiful flute solo and the banjo gets another chance to add it’s special touch.

“Home” is the next song, a soft and melodic tune with a lot of space which is used by Florian Kiehn for a fantastic guitar solo. We hear an interlude where the melody is played either by trumpet or guitar and harmonies are played by the string quartet which creates a very nice and unusual sound. The second solo goes to Christopher Baum on keyboards.

The album closes with “Vortex” where the NHO Big Band Horns support the NuHussel Orchestra. This horn section gives the band a complete new sound, like a modern big band. Max Rademacher and Jan Gospodinow are integrated into this horns section and play very good solos. Another song where I added the video:

This album is really an ambitious and unusual project but the result is definitely remarkable. The band combines different elements seamlessly into one great new musical experience. Please listen to the music and watch the videos. It’s worth it.

More details and tour dates of the NuHussel Orchestra are found on their website: